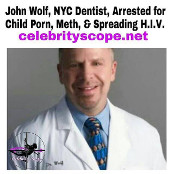 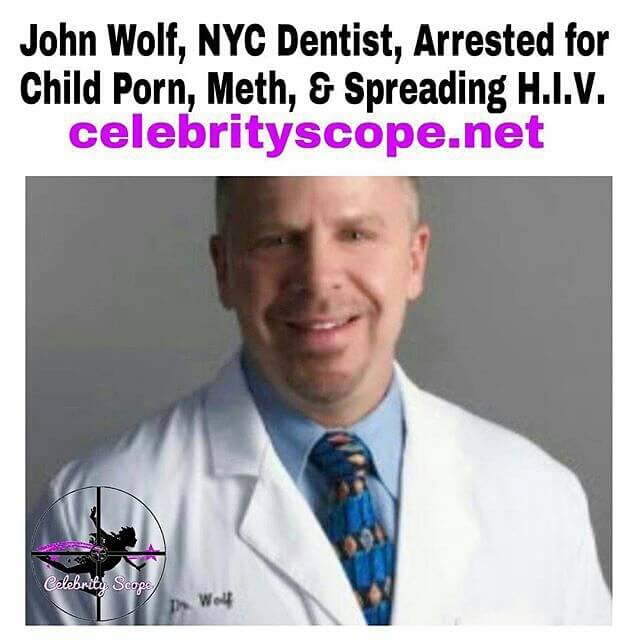 This past Friday in New York City, Dentist John Wolf had his office raided by the feds and soon after was arrested at his home. John Wolf is accused of possession of child pornography and accepting methamphetamine in exchange for services. He also, allegedly revealed to an undercover F. B. I. Agent that he purposely spread H. I. V. to others by puncturing condoms. In Unveiling the gruesome details of this sick, twisted investigation… both office computers and video surveillance equipment were confiscated. By viewing the evidence authorities uncovered a slew of footage where kids as young as toddlers were having sex with adult males. John Wolf also claimed he had wild sex parties in his basement which included intercourse with animals and patients who were drug induced. Some got high willingly, others unknowingly.

Popular NYC dentist John Wolf also admitted to the agent he had been having sex with animals. As for the Methamphetamine… Dr. Wolf  used and distributed it. The feds got wind of this story from a dealer whom was arrested at JFK International airport back in March. He snitched to the feds claiming Dr. Wolf took care of his dental work in exchange for the meth. The drug Ketamine (also known as Slam of K, Special K, K, or Ket ) was also one of the drugs used by party attendees during some of these instances. Ketamine can comes as a clear liquid or in powder form. It is usually white in color and used in both human and veterinary medications.. This drug can injected, mixed in a drink, or combined with tobacco or marijuana and smoked.) His initial court appearance was this past Friday. According to Time Magazine & other sources John Wolf’s scheduled to appear in court this upcoming Tuesday for a follow- up hearing. When Wolf’s brother Robert was contacted for comment by Time Magazine he was “absolutely floored” because he had no knowledge of any of this.

What are your thoughts?